The The Route Distinguisher (RD) and the Route Target (RT) can be somewhat confusing to someone who is trying to learn the concept on MPLS. In this post, I will try and explain what RD and RT are in relation to MPLS.

To answer this question, we will use the following diagram. 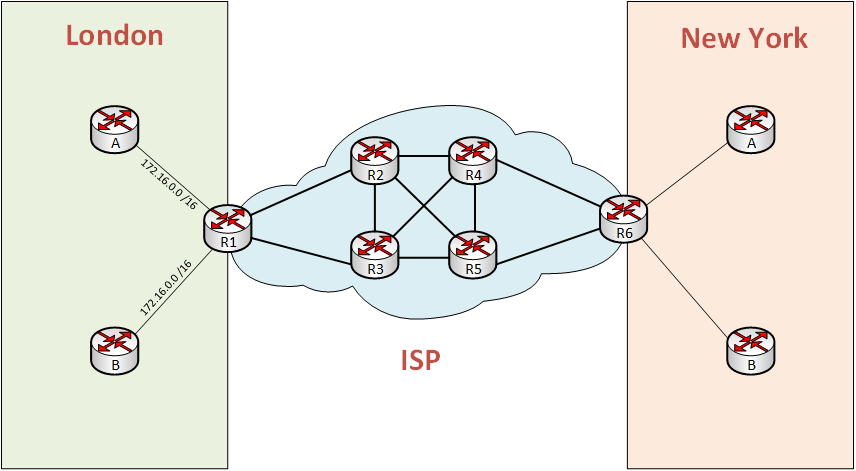 As you can see from the Diagram, Router A and Router B, namely Customer A and Customer B are sending the same overlapping 172.16.0.0/16 prefix into the ISP network. The ISP running MPLS, has the responsibility to take the routes from London and hand over the routes to the appropriate customers in New York.

Let’s try and concentrate on this specific aspect of MPLS where the provider network (ISP) is responsible for keeping the Customer routes unique yet identifying who owns a specific route. This is where RD and RT comes into play.

What the Route Distinguisher (RD) does is actually in the word itself, where it distinguishes the route by adding a 64-bit value in addition to the 32-bit IP making a 96-bit VPNv4 address. Therefore, the ISP can distinguish each and every route regardless of whether the 32-bit IP is overlapping.

Now the ISP can distinguish the routes, how does the ISP knows who sent which route? This is where the Router-Target (RT) comes into play. The RT is a 64-bit community value which is sent along with the update.

This way the ISP running MPLS network can distinguish each route by having the Route Distinguisher (RD) while the Route-Target will enable the ISP to know who the specific route actually belongs to.